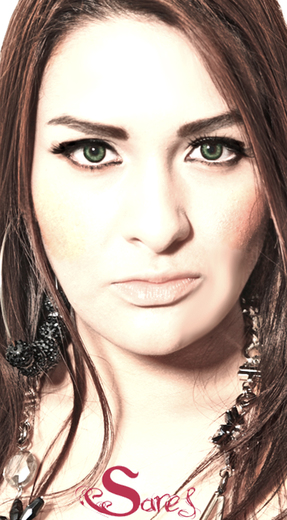 child, she listened to all of her mother's favorite artists such as ABBA, Michael Jackson among others, these that inspired and helped her to develop her talents.
For a short period of time, during her schooling. Sare's was deviated from her dream but never forgetting her passion for music. At 17, her parents decided to send her to Europe for the completion of her studies.

In 2006 Sare's went to London, to take some English classes. After 8 months in the Uk. Sare's convinced her parents that pursuing a degree in the UK would be a better option for her studies. In August of that year, she began her career in Marketing while also taking her first courses in music. “I use to stop and watch the artist playing and singing in the streets and in the underground metro rail stations . Its funny to remember how many trains I missed because I was lost in the music.”

In September, 2007. Sare's returned to Guatemala to tend to family matters. After returning to Guatemala Sare's began to work on her first production collaborating with different musicians and producers to bringing forth the best fusion of her music and style. Currently Sares is in Miami recording her first Album. '' lights and Emotions, Luces y Emociones''

Sare's music sounds like: Sare' s songs are the result of her passion for music. A mixture 70's blue's and rock n' roll, the 80's disco pop revolutionary sound, and the early 90's break and pop style that still continues today.“All of my songs are written simply out of the circumstances of life and the emotions they spring such as love, depression, passion, happiness, and all that moves us and makes us all the more human. “
http://www.saresmusic.com