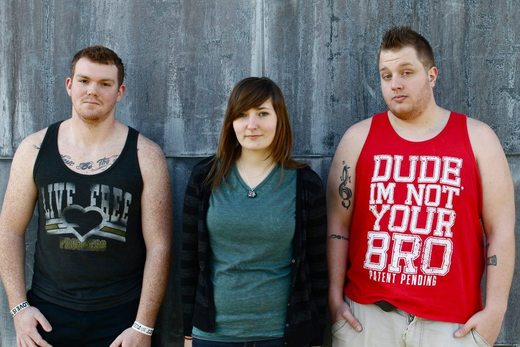 About The Right Regrets

Like most American success stories, the story of The Right Regrets starts in a storage shed in the refinery town of Oregon, Ohio. An impromptu jam session in drummer Sean McGee’s backyard started a fire in the hearts of both Sean and vocalist Katie Toedter. Within weeks, after recruiting a guitarist and later TRR bassist Tommy Chance, the band (under the name Greyline) upgraded to bigger and better things.

Between the spring of 2010 and the winter of 2011, the band focused on building a faithful following in the Toledo area and beyond. In the winter of 2010, the band planned their own 3-week tour, playing venues in Indiana, Kentucky, Tennessee, Mississippi, Alabama, Georgia, North Carolina, and Virginia. Along the way, they opened for notable band The Constellations and expanded their fanbase to teens across the South East.

While Greyline experienced encouraging success, founding members Katie, Tommy, and Sean couldn’t deny that something wasn’t right. Nearly two years and two guitarists after Greyline’s formation, the three decided to scrap everything and start completely fresh. With a new direction in mind, The Right Regrets rose out of the ashes of the late pop/punk band.

In the winter of 2011, The Right Regrets began searching for their own sound. The music they create can be described as the fusion of alternative and indie rock. The band presents an explosive new experience unlike any other. Their energetic music only enhances their stage shows, in which well-crafted lyrics and striking melodies combine with punchy drums and commanding guitar riffs. The Right Regrets aim to create a memorable stage show and a live sound that is just as powerful as their recordings.

In 2012, The Right Regrets released their single from their upcoming debut EP Rise Up Screaming. “Battle Scars,” an upbeat anthem that inspired the EP's title, received acclaim from fans and more. The Right Regrets were asked to play acoustic sets on WFAL Falcon Radio’s show “Pop Punk Is Not Dead" and The Everything In Between Radio Show on MSC Network in Cleveland.

The Right Regrets have recently relocated to the Chicago area and are currently booking shows for the summer and fall. Rise Up Screaming is due out the summer of 2013.