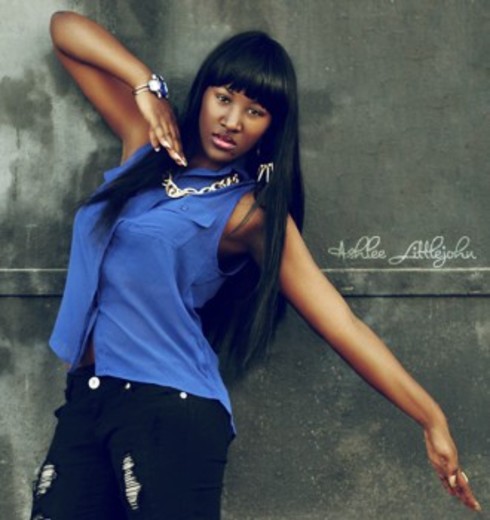 Every so often an artist rises on the music scene that captures the hearts and imagination of audiences throughout the world, Ashlee’ Littlejohn has the potential to be one of those rare artist.  At only 18 years old, Ashlee’ has exhilarated extraordinary vocals that’s cultivated and inspired everyone to listen. Ashlee’s musical influences are Anita Baker, Luther Vandross, Whitney Houston, Freddie Jackson, Nina Simone, Amanda Marshall, and Dinah Washington, just to name a few
Ashlee’ is an American R&B and soul/pop singer-songwriter that has the versatility to sing in both English and Spanish. Ashlee’ is a well rounded artist who listens to all types of music genres, but specializes in soul/pop music. Ashlee’is in her second year of college and is majoring in Biology.
When Ashlee’ was just three years old, she would often go to her parents CD case and pull out CD’s that she wanted to listen too. She would place the disc in the CD player, turn it on, and select the song of her choice, then pull the artist pamphlet out and start looking at it while turning the pages as if she was actually reading it. This was proof of her interest in music at an early age. While in elementary school Ashlee’ sang in school talent shows and performed in band
When Ashlee’ was 11 years old, she participated in modeling and singing shows geared for teens, where she was able to develop her stage presence.
While in high school, Ashlee’ was in Women’s Choral and was the section leader in Alto and Soprano, for two years in row . In Women’s Choral, Ashlee’ was able to perform in musical concerts, and participate in competitions that won numerous awards. In Ashlee’s senior year in high school, she auditioned for a part in the play “Little Shop of Horrors.” Ashlee’ was chosen to play the part of Ronnette in the school’s long tradition play where she was given a solo part. Her singing performance received praise from the audience. At the age of 15, Ashlee auditioned for American Ido
Today, Ashlee’ is pursuing a career in music and searching for a record label to help her fulfill her lifelong dream of becoming an successful recording artist. At this particular time, Ashlee’ is taking music courses in college, where she gets the opportunity to learn more about music. In addition to that, she is self-teaching herself how to play the piano and composing her own music. Everyday, Ashlee’ is working hard to become a successful singer.