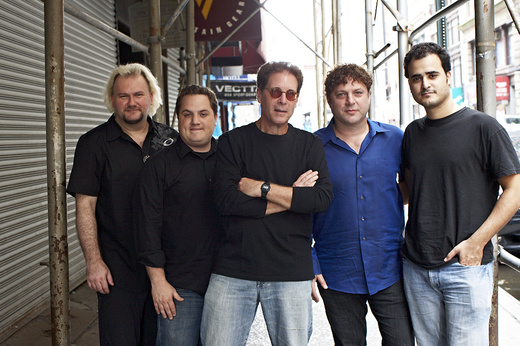 Project Grand Slam's debut album, Play, features "The Captain of Her Heart" with internationally renowned guest vocalist Judie Tzuke. Her hit Stay With Me Till Dawn was chosen by the British public as one of the 50 best British songs from 1952-2002. "The Captain of Her Heart" was an international Top 10 hit in 1986 for the group Double. "Captain" was produced by Haim Cotton and Jan Roeg. An instrumental version is also included on the album.

The rest of Play features 11 original compositions by Project Grand Slam produced by the legendary Frank Filipetti (Grammy Award for James Taylor's Hourglass). The musicians of Project Grand Slam are: Robert Miller plays electric bass and composes. Robert has two albums as leader to his credit: Child's Play (Wildcat Records) and Prisoners of Love (32 Records), both of which received excellent reviews. The former album includes performances by Randy Brecker, Jon Lucien and Anton Fig. His band, The Robert Miller Group, played every major New York area club, graduating to the national festival circuit where they appeared with acts like Bruce Hornsby, Bela Fleck and Kenny Barron. In addition, as co-founder of 32 Records, Robert helped develop this celebrated record label that produced the acclaimed "Jazz For..." series, including "Jazz For A Rainy Afternoon", which dominated the Billboard Jazz Chart.

Haim Cotton plays keyboards and composes. Starting his career in Israel, he recorded over 15 albums. After moving to the U.S., he advanced into arranging and composing. His works have been licensed worldwide in numerous commercials and films. Haim was the musical director for and toured and recorded with the legendary Ofra Haza, appearing at the Montreux Jazz Festival. He also released his own record, 100% Cotton. For the past 20 years this gifted artist has been teaching music at The New School with an ongoing commitment to recording and live performance.

Haim has concentrated on production during the last five years and his latest work, Meowbaby (2007 Sugar Whiskey Records) by saxophonist Danny Lerman, has been hailed as a "breakthrough release." Ron Thaler is one of the most accomplished drummers in New York, having played on and/or produced more than 75 albums. His impressive credits include work with Al Di Meola, Hiram Bullock, Sarah McLachlan, Alicia Keys, Ashley Simpson, Debbie Gibson, Rob Thomas and Taj Mahal.

He has recorded for numerous Hollywood films such as Anchorman and Raise Your Voice and the ABC series Eyes. In the recent past Gilad had worked with some of the greatest living jazz legends of our time, such as Herbie Hancock, Jack De Johnette, Brian Blade, Dianne Reeves, and Kenny Barron to name just a few. Frank Filipetti, PGS's producer, says: "Project Grand Slam's music will appeal to everyone. It's totally accessible. Gorgeous tunes, great beats. This record is a home run. I'm so pleased that I was a part of it." Listen to Project Grand Slam. You`ll love what you hear.