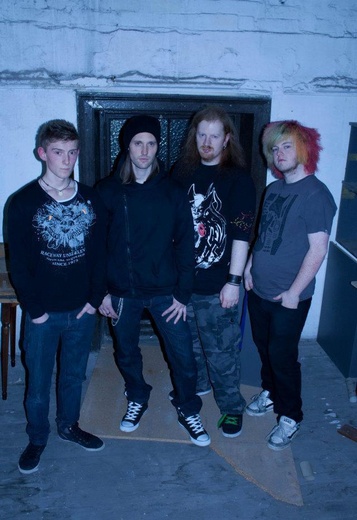 Revolter are a four piece heavy rock band from Blackburn in the UK. They pride themselves on creating heavy detuned riffs that are polished off with melodic and tuneful vocal melodies. The band is comprised of Bryn Tracey on Lead Vocals and Rhythm Guitar, Mark Dyer on Lead Guitars, Sambo on Bass and Jamie Steenbergen on Drums

The band were born out of frustration at the local and national music scene in their homeland and quickly got to work on writing a bunch of well crafted songs that attracted major interest from the online community. This presented the band with an epic Number one song on the Overplay.com charts for the balladic "So Far Down" The band also whipped up a solid and loyal local fanbase as well as an army of fans worldwide that is continuous in both its growth and support

In February of 2010 the band recorded their début EP and released it in May 2010. After dropping their record label Swerve records the band toured the EP release before shooting their first video for the anthemic "Sick Little World

This subsequent video catapulted Revolter into the limelight and has seen airplay on many TV channels around the world.The video is also currently playlisted on Lava TV sky channel 378 in the bands homeland the UK

2010 also saw Revolter feature heavily on BBC Introducing with a record 5 different songs (Sick Little World, Chains, Fades To Grey, 17 Days and So Far Down) being featured weekly and seeing lots of airplay throughout the year. The band also followed all this up with multiple radio stations across Europe, US, Canada, Africa and Asia all playlisting and airing Revolter songs from their début EP "Desire For Truth

The bands upsurge through 2010 gained them contention for prestigious support slots with huge bands such as Paramore, Alter Bridge and Biffy Clyro. It also saw them share the stage with some great bands in some amazing venues across the UK

2011 promises to be a huge year for Revolter.Their debut single "Sick Little World" was released at the beginning of February,their debut album "When We Died Screaming" is pencilled in for a May release and the band are working on festival slots for the summer.Revolter are also shooting a video for their second single "17 Days" which will be taken from the bands debut album and released in the summer of 2011.