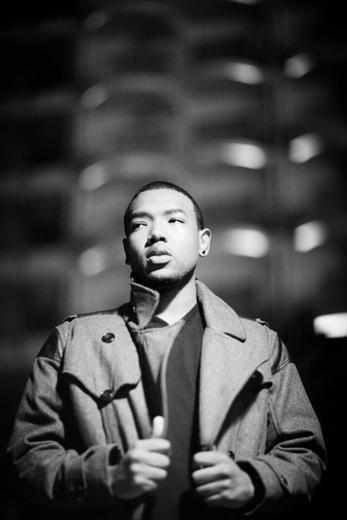 His voice seems to float on air.  His sound is unique and ethereal.  The influences of J.Cole, Lupe Fiasco, and Mos Def are there, but there is no denying the distinctive sound of this sultry artist.  Shaun King’s voice makes you sit up and take notice.  His old skool feel combined with new skool mechanics produces a gritty, real sound that is undeniable.   His sound is true to the genre, intense, and powerful.

Born on February 22, 1985 in Oxford, North Carolina, Shaun King grew up watching his mother work hard as a single mom struggling to raise 2 young girls and 2 boys. His parents divorced when Shaun was just 2-years-old.  When his parents eventually split, his 2 sisters went to stay with his father and Shaun and his brother remained with his mother.   When Shaun was 7, his mother remarried and the family moved to Hampton, Virginia.  That’s when Shaun was first exposed to the streets, his brother becoming involved in drug dealing and Shaun struggling to keep his head above water and his butt out of trouble. Shaun watched his brother and cousin succumb to life on the streets, repeatedly imprisoned for various offenses.  Shaun’s cousin wanted something more for Shaun and he urged Shaun to enlist in the Air Force, which he did.

While being deployed to various locations throughout the globe including Washington D.C. and Okinawa, Japan, Shaun used his free time to develop his music, sharpen his flow and build his brand.  And, as they say, ‘build it and they will come’, Shaun’s debut mixtape, Defining Moment, which was release in Japan, quickly became the talk of the town.   His first single, Different, with its fiery tracks and stark lyrics, commanded critical attention.

Shaun King is a force to be reckoned with.  He continues to hone his skill, his determination fueled by the memory of his hard working mother who struggled but never gave up.

Shaun cites some of his influences as Jay-Z, A Tribe Called Quest, Pharrell, The Clipse, and The LOX.   While his influences are clear, Shaun’s unique blend is singularly his own.  His sound is powerful, real and distinctive, characterized by constantly shifting textures, a unique approach to rhythm and an unrelenting flow.

Shaun King is quickly gaining momentum as a viable force on the hip hop scene with his clever approach to the genre.  This young man has his head and heart in the right place and he is making his mark on the music industry and will undoubtedly continue to do so for years to come.  Shaun is currently working on his next mixtape, Live or Let Die, scheduled to be released in early May, 2012.