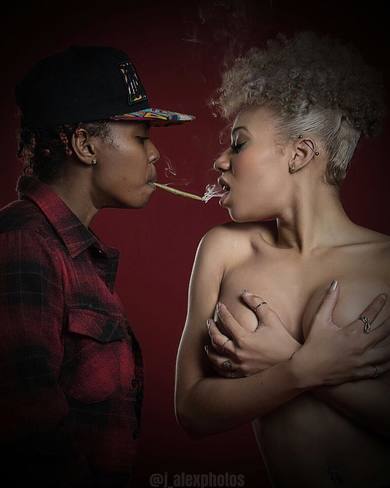 Tierra Richell Stevenson (born February 26th, 1988) an American Artist From Rochester, NY, Now known as Star Cavalli previously known as Star AKA Fresh & Baby- T. Star Cavalli is one of those real talents that arise from the inner city Streets, very well known for mingling with some of the worlds most famous celebrities she definitely has the "Star Power". A fresh face on the scene with a creative mind that combines street edge lyrical combat with a slick witty character. Star Cavalli writes her own material (which she has adapted to laying down her lyrics without a pen and a pad) as well as helping to destroy the concept that females can't hold it down in the rap industry. Star Cavalli has a down south swag with a New York projection and a verbal charisma that captures ears all the way to the west coast. While she was still the young Baby T With a Billboard 100 Hit entitled"Get Stupid" While signed to Gone Crazy Ent., she was being classified as "What's next for the females in the Streets & beyond," for her uncut rapping ability. She's still ripping the scenes demanding attention showing the world what an opinionated, image suppressed, verbally wreckless female can offer to educate and entertain the world with her tribulations and rock star story lines.

Star Cavalli managed to accumulate a huge buzz throughout the state of Florida by performing and battling at Hot Import Nights as Boost Mobile's 2x Freestyle Champion. She performed at the Orlando convention center as well as co-headlining alongside major recording artist Trina at the Miami convention center with both venues having crowds of more than twenty thousand each. She continues to hold and defend her undefeated title as the 2x Boost Mobile Freestyle Champion.  also known for group project "FlyghTeam" with Lexx Rugga & Milo Stokes (Son of Chris Stokes). Immediately Following the "FlyghTeam" project, Star Cavalli released a highly anticipated solo project entitled "Murder She Wrote" in which turned out to be a very successful underground mix tape posted on many popular hip hop blogs and websites. After taking a break to birth her daughter Karmiyah , Star Cavalli once again came back with a highly anticipated project entitled "Fame and Heartbreak". Followed by Miami nights, Miami Nights 2, King Valli & More.