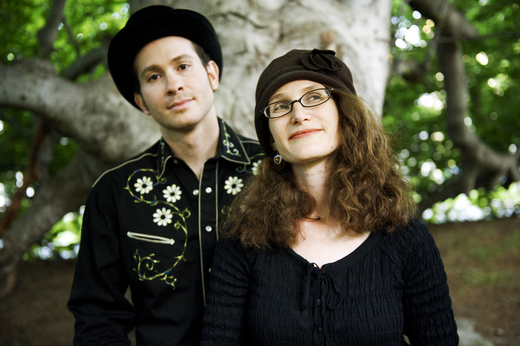 On their debut album, Wherever You Go, Sweet Wednesday takes listeners traveling across the country to meet unforgettable characters living their lives on the frozen streets of Winter Hill, the subway cars of Brooklyn, the phosphorescent sands of Half Moon Bay, and places in between. Your guides for the journey are songwriters Dave Falk and Lisa Housman, who perform both as an acoustic duo featuring vocals, guitar, harmonica, and mandolin, and with their band taking it up a notch by adding bass, drums, piano, and Hammond organ. Lisa and Dave have won numerous songwriting awards, including First Place in the Great American Song Contest, First Place in the Dallas Songwriting Competition, and Runner-Up in the John Lennon Song Contest. Characters that make their appearances in their songs include a grandmother with a secret crush on James Bond, a traveling dog, and some rats named Grumpy, Sleepy, and Sister Heartache. Their fun, engaging show has played to crowds of all ages at venues ranging from coffeehouses at folky haunts like Club Passim in Cambridge to raucous bars, intellectual college campuses, and the wedding of a couple whose first date was a Dave & Lisa show. To make Wherever You Go, Dave and Lisa teamed up with producer Rob Ignazio and several of Boston’s finest musicians, including Swinging Steaks members Andy Plaisted, Paul Kochanski, Jamie Walker, Steve Sadler and Jim Gambino. The Swinging Steaks are local legends who have toured with the Band and the Black Crowes and appeared on Mountain Stage and Late Night with Conan O’Brien. Other contributors include Steve Mayone lending lap steel, mandolin, and lead guitar licks, and Seth Connelly. Upon completion of Wherever You Go, Sweet Wednesday added bass player Sean Emery, drummer James Hayward and keyboard player Tony Cabral. Bassist Sean Emery cut his teeth playing rock and blues with Ryan Heartt and Eric Ducoff, currently of Connecticut's acclaimed RyanHeartt and the Blue Heartts. Over the years, he has performed with several bands, most notably, Western Massachusetts bluesmen Wildcat Bill O'Halloran and Otto "Automatic Slim" Lenz. James Hayward, a drummer for over sixteen years, brings a variety of jazz and rock sounds to the live show, evoking the sensations of snow falling, rain splashing and thunder crashing. Keyboard player Tony Cabral adds great piano and Hammond organ chops. Just don't play cards with him. He cheats. Really, really well.