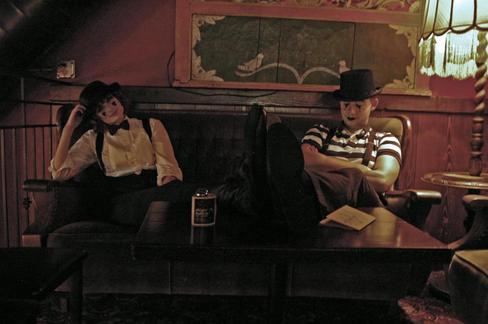 1990s. Rural Eastern Washington. The neighborhood kids are crowded around a giga-pet on the corner of Sherman Road and Nowhere while Tamara and her brother Rob are huddled around their family’s out of tune Steinway pounding out songs from Camelot and the Rat Pack. Sure, their parents might have been slightly concerned when Tamara auditioned for the grade school talent show with “Tits and Ass” from a Chorus Line; but how do you tell a girl dressed in neon stretch pants, a tutu, and a pure love of music about age appropriateness? Music wasn’t a hobby at the Power-Drutis household, it was a lifestyle. It was the reason to get out of bed and run downstairs and the drive to finish your vegetables. You know, not a whole lot has changed since then.

Except that Tamara and Rob are now huddled in a dark, twinkle lit practice space in Cap Hill with the likes of Rhythm Rose Turner and Shaunessey Fischer Scott while the neighborhood kids outside on the corner of Pine and Alternative gather around their iPhones. It’s the cluster-fuck of musical backgrounds in Phinney Estate rehearsals, with Shaunessey’s classical double bass, Rhythm’s rock drums, Rob’s ragtime piano, and Tamara’s folk acoustics. What ties it all together? An unadulterated love of music... and perhaps just a little flair for the theatrics. “I think you’ll recall what happened the last time you put a mic in front of me on stage Tama,” Rob threatens while Rhythm Animals on the drums and Shaunessey tries out a new bass lick on his electric.

It’s this playful approach to music that led them to Justin Davis at London Bridge Studio where they recorded their first EP together in Winter of 2011/12. “Burn it to the ground” which was released February 22nd at the Columbia City Theatre.

A live album, PEEP, was released from that performance as well, and is available as a free download on their site www.phinneyestate.com.

On her debut album, Tamara brought her unique voice to the Pacific Northwest and spins songs of bruised egos and the vicious cycles of foolish love--like little snapshots of late night bedroom fights or awkward silence in a telephone call. With a soft voice and style, Tamara takes a hard look at both the bitter and the sweet view of love.

Tamara’s first, self-titled CD was produced by national recording artist and award-winning songwriter Dennis Magee Fallon (www.dennisfallon.com) at the world famous London Bridge Studios in Seattle (www.londonbridgestudio.com) -- the same studio that defined the Seattle sound of the 1990’s, where platinum albums by Pearl Jam, Alice in Chains, Blind Melon, and Soundgarden were all recorded.

The debut album wom Tamara fans across the Northwest where she is constantly touring and performing as a solo artist, with Phinney Esate, and with the Seattle Rock Orchestra, as well as recognition in various National and International venues including a feature in the Alternative and Indie front page of Windows Media Guide, opening performance at the Moore Theatre for the 2010 national tour of Hanson, station list on Pandora.com, and inclusion of her song “Black Rain” as the theme for the Ashley Michael Karitis documentary “Free World.” A world traveler (including formative stops in Africa, Japan, Ireland, and South & Central America), her international experiences have given her inspiration and perspective that gives her songwriting a fresh take on her favorite songwriting subjects: boys, bedrooms, and big questions.