It was in the fall of 2005 that Jason Whetstone, Deb McClain, and David M. Glasgow gathered in the middle of a busy week to “just sing.” They had performed together before in various contexts, but all three agreed: it had been too long since they’d been able to escape from the requirements of day-to-day life and “lose themselves” in the music. The auditorium was empty that night, and the three voices—unrehearsed, insecure, and exhausted—echoed in the space like an abandoned cathedral, surrounding and comforting and encouraging the three tired souls, and over the course of the evening the tempos—and their moods—grew noticeably brighter. The experience was just what they had needed, and they decided to make a habit of it.

Since that time, the trio has shared their music for thousands of listeners, in coffeehouses, conference centers, and festival stages. Wherever they go, whatever they sing, they try to share the lessons they learned that first night in the empty recital hall: that risking vulnerability can be a source of strength; that naming pain is a step toward healing; and that acknowledging limitations is part of finding wholeness.

And audiences get it. Listeners speak of hearing “exactly what they needed” in the music of Three Twelve, in situations ranging from a bad day at work to a cancer diagnosis.

Much of the credit for that connection lies in the purposeful diversity of their repertory. With musical styles ranging from intimate ballads to jump-up-and-down rock, a typical Three Twelve concert may include covers of Sheryl Crow, Seal, and Madonna, music from Rent—wherever the trio themselves find transcendent truth. And then there’s the trio’s original material.

“Pop music is about crafting catchy sounds that make people want to listen,” confesses Whetstone. “You have to start at ‘Point A,’ which is where everybody expects you to be—where they feel comfortable. But good music takes you from there to some weird, cool ‘Point B,’ and you don’t realize until you get there how much you love it.”

“And we try to do that with our lyrics, too,” adds Glasgow. “The best songs, on the surface, are talking about really simple, everyday, almost elemental stuff: a river, a tree, a storm—even a dinner party or a bus ride. But when you sit down and really listen through the metaphors, you hear… yourself, somehow. It’s a very intimate feeling.” He smiles. “It’d be creepy if it weren’t so cool.”

McClain agrees. “Everyone goes through times when they feel like nobody understands them. And whether we do slow, intimate songs or ‘rock it out,’ we only choose music that really speaks to us. We try to sing the words that maybe aren’t so easy to say… but when you hear those words come out of someone else’s mouth, you think, ‘wow, I’m not alone.’ And that feels good.” 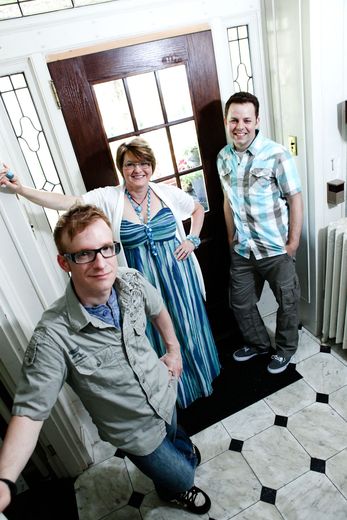