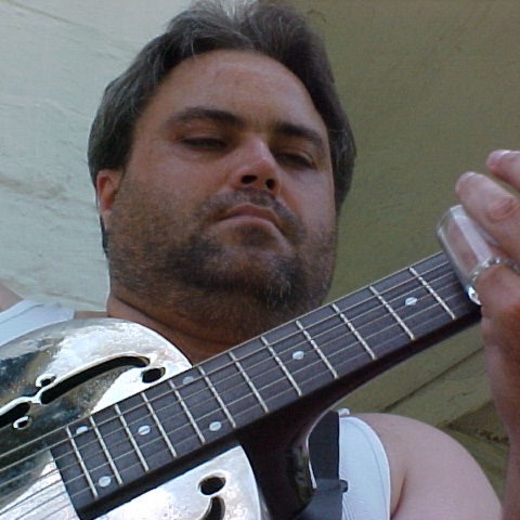 As a classically trained actor, accomplished musician, slide guitar virtuoso and published songwriter, with over twenty-five years in the entertainment industry, Tom Hubbard is a consummate gentleman of the stage and screen

Tom Hubbard was born and raised on a beef, dairy, grain and row-crop farm in Newnan, Georgia. The typical and arduous endeavors experienced as a youth on the family farm was the basic foundation that Tom inevitably built upon with discipline, tenacity and commitment in ultimately developing a distinct avenue in which to feed his uniquely creative persona for years to come

Initially, after completing his formal thespian training, Tom Hubbard began his entertainment career in Theater, ultimately securing several prominent roles. During his time in the Theater, Tom was continuing to cultivate and fine-tune his interest in guitar and music in general, which he had possessed since early youth. He would routinely perform, both locally and regionally, with his trio Blues band, whereupon, as time slowly passed, he began to realize an increased interest in, not only the genre itself, but his stylistic approach to the slide guitar as well. As an entertainer, Tom continued to carry on with his ventures encompassing both music and theater. It was the result of his gaining notoriety in the Theater however, that Tom was ultimately signed by a prominent national talent agency. Shortly after his obtaining official representation, Tom began to secure several roles in various television and film projects nationally

Just as he had done with the Theater, Tom continued on with his musical endeavors whilst being engaged in television and film projects as well. With his acting career remaining somewhat on an even keel, Tom’s music career was moving constantly forward at a rapid pace. It was at this point that Tom decided that he could no longer dedicate the sufficient time that was uniquely needed to both professions individually. Therefore, Tom decided to separate himself from the acting profession and concentrate solely on his music career. This turned out to be a wise and timely decision for him

After many years of performing live, both as a solo artist and with his trio band and duo act, Tom released his first album in 1993, which received moderate success. It was in 1994, after an agent was present at one of his performances, that Tom was approached by Elixir Records to record an album for national distribution. This album, entitled “Slideslinger,” was officially released in 1995, thereinafter, laid the foundation for a fruitful career in the years to come. After extensive touring and mild contractual differences with the record company, Tom released his second album, entitled “On The Dark Slide” in 1998 on the Pyramid Records label, which he deemed to better suit his projected endeavors. It was with the release of this album that Tom was afforded the opportunity to tour globally. With Tom’s arduous touring schedule, copious radio interviews and television appearances, this album, which was routinely getting regular airplay on radio stations worldwide, became one of the top ten Blues albums of the year

While on tour, fans were constantly requesting that Tom release a ‘live’ album. This was due to the enthusiasm, energy and excitement commonly conveyed and displayed by Tom at his performances, that they felt needed to be captured and didn’t totally come across in a typical studio recording. These voices were distinctly heard by Blue Sunday Entertainment, where, in 1999, they approached Tom to record a ‘live’ album. This album, entitled “Slidin’ At Ya LIVE” was released in late 1999 and was a welcomed present to his patiently awaiting fans

After many more years of touring, appearances and ultimate success within his genre, and the music industry in general, Tom’s fans were again requesting a new album. By this point, Tom’s music had culminated into a solidly distinct and highly unique style, easily distinguishable from any other contemporary artist of the time. Tom decided that this new album was going to possess innate and introspective elements that had not previously been conveyed to his satisfaction in his earlier recordings. In 2003, Tom released “Shadows and Potions” on the Ayrshire Music label, which he still claims to be his very best work to date. Like his previous two releases, this album achieved global success and conclusively positioned him as a prominent musician and songwriter, not only within the genre itself, but in the profession overall

Amidst touring in promotion of his latest release, Tom’s attentions also turned, at the request of several of his professional friends and associates, to producing album projects for other specific artists. In late 2003, Tom produced two albums for Pete “Snakey Jake” Johnson, a popular UK traditional blues artist, for release on the Ayrshire Music label. The following year, Tom produced albums for the two unknown, but upcoming, Blues artists Garrett Easley and Jim Brownson, for Blue Sunday Entertainment. After many years of having produced his own albums, Tom applied the same attention to specific detail and singular comprehensiveness to these projects as he had done with his own. The ambiance produced by Tom’s unrivaled perception and adept precision is easily distinguishable in their finished products

Just as they had done prior to the ‘live’ album, Tom’s fans had continually requested that he release an acoustic album, applying his unique stylistic approach to a traditional roots type project. Tom had started out many years ago as a traditional type Blues artists, and an acoustic project was something that he had wanted to do for several years, but the opportune time never presented itself. Tom decided that this was indeed the opportune time to tackle such a project. After taking almost a year of interminable work and toilsome endeavor in the studio, Tom released his first all-acoustic project entitled “Window To The Past” on the Ayrshire Music label in 2005. Tom ardently insisted that this album possess the traditional ambiance of the 1930’s. This seventeen song album contained an array of acoustic instrumentation and vocal delivery that mentally transported the listener back in time, and is touted to be one of the best modern representations of that era. Tom’s insistence was well-founded and his fans were overjoyed to have an album that rivaled his previous ventures

During 2007, 2008 and 2009, Tom had stopped touring to the same extent as he once did. Having toured extensively for well over a decade, Tom only performed on rare occasions at certain festivals or at special events. However, far from being a seasoned recluse, during this time, several opportunities occurred to rekindled his former interest in acting. His previous talent agency, to which he was initially signed to back in the 1980’s, as of October 2008, once again had Tom Hubbard on their roster of represented talent

2010 through 2012 were fairly eventful years as Tom once again took to the road performing at festivals and venues globally. Although his touring schedule was less than in previous years, the festival and venue response was indeed overwhelming. Also, 2012 saw Tom Hubbard's new CD release entitle Live at "The Zoo Bar",  which was previously recorded at the notorious blues venue

Presently, Tom Hubbard is continuing to meld his acting engagements with his music engagements, whilst also continuing to indulge his literary endeavors in authoring many specific publications toward a cross-section of topics, peripheral to, and circumscribing the experiences undergone and knowledge developed over the past forty years.