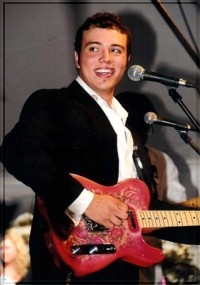 After picking up a guitar at the age of 10, he quickly took the bluegrass world by storm —even performing on the Grand Ole Opry when he was 11. Three years ago, the now 20-year old artist followed his heart and interests into the world of country music. Now, with his second country CD, titled “It Is What It Is,” that was released on July 4th, the Jonesborough, TN native is heading out playing his own brand of traditional honky-tonk music. Called a “bona fide hillbilly rock star” by Marty Stuart, Trey’s new CD is a combination of new, radio-friendly contemporary songs as well as songs with the classic sound of some of his heroes. The release offers covers originally performed by Elton John, Conway Twitty, Jimmy Dickens and The Gaither Vocal band. He’s also included covers written by Charlie Daniels, Larry Gatlin and Jeannie Seeley, along with songs that have never been released written by Steve Wariner, the great Johnny Russell and Chuck Allan Floyd. Some legendary singers even stopped in to sing with Hensley on the CD. “It was unbelievable to me that some of my heroes would actually come in and record with me,” Hensley said from the studio in Nashville. The special guests include Steve Wariner; Janie Fricke, and Duane Allen, Joe Bonsall and Richard Sterban of The Oak Ridge Boys. “For as long as I can remember, music has been a focal point of my life. These artists have played the background music to my life, so to hear their voices on the same tracks as mine, is an honor and a dream come true.” Last summer, Hensley hit the road with his four-piece band for a tour that will carried him from Philadelphia to Los Angeles , Nebraska to North Carolina and beyond. His tour included headlining dates in theaters and outdoor venues as well as opening for artists like Steve Wariner, former Alabama front-man Randy Owen and Marty Stuart. “I realize how far I have to go to achieve my dreams in music,” Hensley said, “but when I look back and see performances for the President and Vice president of the United States, for some of our wounded military heroes, and playing my music on the stage of the Grand Ole Opry and elsewhere, I recognize just how fortunate I am to get to do this for a living. I’ve got a great band, and I love singing and playing my music. As long as anybody wants to hear me, I’m going to be out there doing it!”