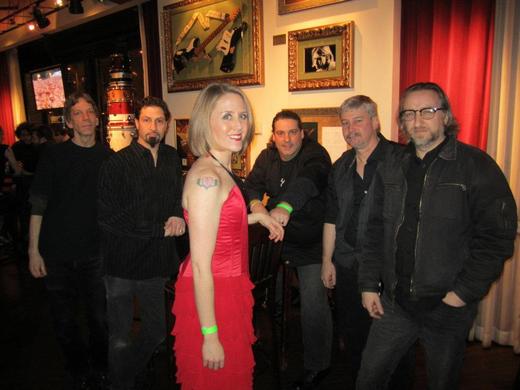 Once upon a long time ago in a galaxy somewhere in New England, Under Atoms saw its meager beginnings in a simple bass player's basement. Times were tough, the beer was warm, but they've held it together for many a year.

Originally called Under Adams, the band has consisted of Heather Taskovics (then Erickson) on vocals, Chris Bachmann on bass, Steve Briggs on guitar, Jack Parsons on keyboards, and Dave DerBoghosian on drums

After several years, a relocation of basements later, and a new "Nom de Guerre", Under Atoms now thrives somewhere near the shores of Salisbury in Dave's basement.

A few years ago, Under Atoms decided to bring on Dave's cousin, John Naroian, as another guitarist. They've been grateful for the welcome addition to the mental madness ever since.

If you ask them "Who do you sound like?" they'll probably just shrug their shoulders and go back to drinking their beers.

In addition to performing around the northern reaches of Massachusetts, Under Atoms has been happily blasting their sounds at some of the more famous venues in Boston, including the House of Blues and the Hard Rock Cafe.

Their next move towards "World Domination" is to get their musical keisters back in to the studio to record. Stay tuned...